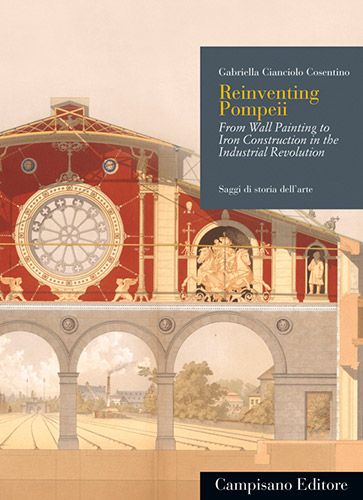 Gabriella Cianciolo Cosentino is an architect and architectural historian trained in Palermo, with a strong record of international academic publications. Her research interests focus on nineteenth- and twentieth-century European architecture, reception studies, and heritage conservation. She has received numerous post-doctoral fellowships and research grants from Italian, German, and American institutions, including the Alexander von Humboldt Foundation, the Bibliotheca Hertziana, the Italian Academy for Advanced Studies in America (Columbia University), the German Re- search Foundation, and the Max-Planck Society. She is currently teaching history of architecture at the Technische Universität München and coordinating an interdisciplinary research project on Pompeii based at the Kunsthistorisches Institut in Florenz.

Pompeii exists not only in its concrete materiality in-situ and ex-situ, but also in countless adaptations and re-interpretations which shape our cities and deeply affect the modern world. This book examines the impact of Pompeian wall paintings on European architectural design and discourse during the Industrial Revolution, with particular focus on the role of the Vesuvian city as a laboratory for the creation of a new ‘iron style’. When cast iron first appeared as a building material, architects faced unprecedented challenges after millennia of stone construction: cast iron required a new language, a new syntax, new proportions and ornamental patterns suited to the characteristics of the material and in line with the functional and aesthetic standards of modern cities. In this context, the imaginary structures painted on the walls of Pompeian buildings, interpreted as a prefiguration of a light, airy, dematerialised architectural order, were adapted to the needs of the time through a process of transfer from one medium (painted surface) to another (three-dimensional structure). A selection of case studies – including works by Karl Friedrich Schinkel, Henri Labrouste, Jakob Ignaz Hittorff, and Gottfried Semper – illustrate how the so-called Pompeian arabesques, i.e. models, motifs, and ideas found in fresco paintings, were transformed into iron elements at various scales, ranging from the decorative detail to the structural support. This study also explores other forms of dialogue with the ancient city, both theoretical and applied, as well as archaeological, art historical, and philosophical issues related to the paintings and their afterlife.