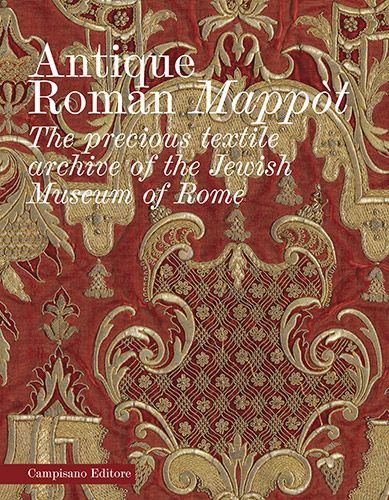 The long and fascinating history of Jewish Rome is narrated by the objects and documents preserved in the Jewish Museum of Rome in the monumental complex of the Great Synagogue. The museum boasts an important collection of silvers and other decorative works of art from the 16th -19th century, hailing from the five scole (synagogues) of the ghetto. The collection of fabrics stands out among these. Precious textile decorations for liturgical use were made from second hand fabrics because of prohibitions that Jews were subjected to. The special aim of these decorations was to beautify and preserve the dearest object in the temple: the Sefer Torah.  The museum preserves splendid examples of curtains (parochot) for the Holy Ark, binders to roll up the scrolls of the Torah and mantles (meilìm) to cover it. Amongst all these, the collection of almost two hundred mappot shines. They are the long fabrics that protect the Sefer Torah; cloths enriched by lavish embroidery with family crests, Hebrew inscriptions and suggestive images like the delivering of the Tablets of the Law on Mount Sinai, the Seven Fruits of the Land of Israel, spiral columns of the Temple of Solomon and other traditional Jewish symbols. Their inscriptions, a real and true textile archive, are an enchanting window onto the world of the ghetto and its inhabitants. Each donation tells a story, sometimes poetically inspired, and consists of the names of the protagonists and their families, relationships of love, affection and friendship, the synagogues, and the year of their consecration. The Jewish Museum of Rome’s catalogue of mappot allows us to emerge ourselves in the history of fabrics and get to know one of the oldest Jewish communities in the western world.