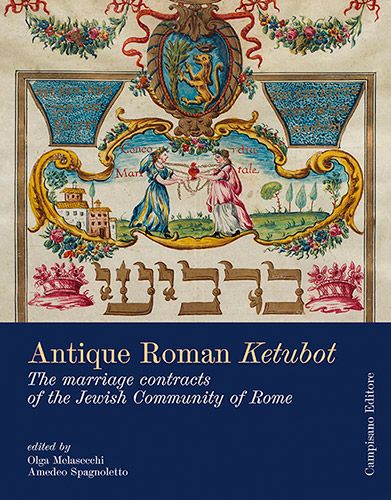 The term ketubah (pl. ketubot) derives from the Hebrew katav meaning to write, to record. It is a document, juridical in nature, which in Jewish marriage, certifies an obligation assumed by the husband in favor of his wife and which also serves as testament of the bond. Its origin is ancient. Although it is not explicitly mentioned, according to some experts and scholars it is possible to find traces of it in biblical literature. At the Jewish Museum of Rome and the Archives of the Jewish Community of Rome eighty-six splendid, Roman-made ketubot in fine sheep’s parchment are preserved. They are handwritten and decorated in watercolor and date from the end of the 17th century to the beginning of the 20th century. Rome was home to one of the places of greatest production of the art of decorating Jewish marriage contracts in Italy. The historic value of these documents was very important, through them families not only demonstrated their social status, but they also celebrated happy and exciting moments of freedom. There are many ketubot that are decorated with the colors of the French flag dating back to the favorable period of Napoleonic domination in Rome, and there are many with the colors of the Italian flag, dating to the Emancipation period, when, with the unification of Italy, and especially with the end of the temporary power of the Popes and the definitive abolition of the ghetto, the Roman Jews were finally made equal to their compatriots. The rich iconography, the in depth archive research conducted by various authors and the reconstruction of complex familial affairs restore the cross-section of a lively and culturally active community, still relatively unknown even in national and international Jewish circles and at the same time they offer precious support to many Jews in the capital to recapture their roots.